How To Play Any Class

With the coming of a new expansion, Blizzard decided (as they like to do) that they were going to tweak a few classes. Only in this case, “a few” meant “all”, and “tweak” meant “turning several of them inside out”. In a couple of cases (Survival Hunter and Outlaw Rogue), they changed them to the point that they were unrecognizable from the original class. Talents in general got reworked, major glyphs were wiped from existence, and players were sent back to the drawing board, scratching their heads.

It’s a situation that can be intimidating for casual players. They want to start playing their class again, but more importantly they just don’t want to suck. Be it a LFR raid or running in a dungeon group, no one likes being that one player on Recount who, given the numbers they’re putting up, is clearly playing the game using their feet.

Ask one of these people who seem to be using their in-game abilities by shouting at their keyboard what the problem is. If you get any response at all, you’ll probably hear “I don’t take it too seriously. I just play for fun.” What this means is that they don’t want to look up optimal rotations, or any rotation for that matter. They won’t look at Icy Veins or Wowhead or Ask Mr Robot, or any website at all that might come off as intimidating to them.

This solution may seem too complicated for the uber casual, but I assure you that it isn’t. This is one of those cases where the reward far exceeds the effort. What the Hell am I talking about? I’m referring, of course, to the enhanced version of Gnome Sequencer.

What this addon does is runs through a rotational macro for a certain class. It might not get you to top the charts, but at the very least it’ll keep you functional. I used the old version of Gnome Sequencer when I leveled my Mage from 1 to 100 and ran him through LFR. I’d never played a Mage before, but I found myself doing just fine on the charts despite not being able to name even three of my abilities.

Some people may call this “cheating”. Far from it. I would rather have someone who didn’t have a hot clue what they were doing using this addon, than having them fumble through the “right” way like a chimp manhandling a brand new rock.

Kephas does a great job explaining the addon, from installation to application. Check it out, download it HERE and hopefully you find yourself a productive member of your LFR.

Comments Off on How To Play Any Class

Everyone wants an easy way to play their class. Some folks just can’t wrap their head around rotations, priority, and the like. Granted, there are plenty of folks who are more cutting edge players, squeezing every last drop out of their class. But there are plenty of players who just want to  not suck. For those people, wowlazymacros is a great site to help set them up.

I’m starting to play around with this one button frost death knight macro, created by Amanda Nicole Hedrick for a Dual Wield Frost Death Knight. I’ve experimented with a few macros on Herculees, who admittedly doesn’t have the best gear. But this one gave me the highest burst and highest sustained dps for my gear. Plus, I like not having to think about Blood Tap.

Now to use this, you’ll have to use the mod Gnome Sequencer. It can be a bit tricky to set up, so I’ll let Kephas explain how to do it.

I’ll probably start using this in PVP while making a few changes to talents and glyphs. For now, let Icy Veins be your guide for such things.

Comments Off on One Button Frost DK Macro For Patch 6.2

Okay Internet, let’s get one thing straight. I will get Draenor flying. Don’t you worry your pretty little head over it. I just won’t get it in the next few weeks.

And I blame Kephas for that (@TheKephas).

It all started when I was doing the Tanaan Jungle rep grind dance. I was working the quests, picking up Apexis crystal rewards on a character who really didn’t need the gear. “What a waste,” I thought to myself. “At least I’m getting the rep for flying.”

As fate would have it, I happened to be playing his video “Gearing up for Hellfire Citadel” in the background. It’s a great video, and despite the length I highly recommend that you both watch and listen to it. He discusses the best way for gearing up in patch 6.2, so naturally it’s worth checking out.

That video slammed the emergency brakes on my flying progression. Yeah, it was that good. Well, for me anyway. Like I said, I’m a simple beast.

The video in question, or Exhibit A (for Apexis – get it?):

It all seemed like a great way for a character to gear up. That got me thinking – did I have a character that I could gear up like this? At least to the 650ish iLevel?

For the giggles of it I started looking at my level 100 characters. That’s when I found him:

Oh he was terrible for all the right reasons.

I decided that for a few days, I would work to get him into Tanaan Jungle and see about upgrading his gear. Of course, I could wake up tomorrow and decide that this is all stupid and a waste of time. But until then, I think I’ll see what I can do.

Look at that. I’m playing an undergeared Alliance Prot Warrior. Thanks Kephas! 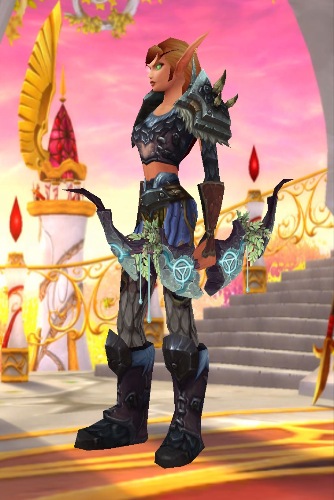 I don’t know when it happened exactly, but one day I decided that I wanted to level up one of my alts. But not even in a significant way. Like, maybe just a couple of levels. Just the tip of the leveling iceberg, but enough to unlock one of the garrison slots so I could set up a profession building and then just leave them there. They’d grind away on that one profession, run the occasional follower mission (for the four followers that somehow stumbled into the garrison and were pressed into service), and alt nature would take its course.

My Hunter got the nod. She’d already been hanging out in her garrison, because like a smart person I leveled my alt to the point where they had a garrison and then left them there. This meant she had resources, which meant she could buy XP potions.

Now it had been a long time since I’d done anything with a hunter. Yes, I got her into her garrison but I had no idea what I was doing. I recalled a few things from a long time ago, and fumbled through the storyline without getting her killed. But for a serious xp push I was going to have to be able to put a rotation together.

As luck (and laziness) would have it, TheKephas had posted this video a little while ago. I was all over it like stink on a fish.

What makes this macro even more impressive is that with the Glyph of Misdirection, I found that my hunter was casting it all the time. She NEVER got aggro! This meant she was free to knock back an XP potion and I’d see what I could do in the potion’s hour-long duration.

What I did was pick up just over one level. Naturally I was following the Horde 90-100 Fast Leveling guide that was posted on Elvine’s forum board.

Maybe I’ve just talked myself into leveling this alt to 100. So much for just the tip.

That’s what she said!

Comments Off on One-Button Macro for MM Hunter

Unlocking the Pet Menagerie in WoD

Because, you see, what the World (of Warcraft) needs more of is Battle Pets. So, so many Battle Pets.

Master Rokk here. I’ll freely admit that I’ve done my fair share of pet battles. Many of those battles were for leveling pets because I get these headaches when I see achievements that are almost but not quite finished. Also, a leveled battle pet can sell for a couple hundred extra sheckles than your basic level one pet. Not to mention using pet battles as a way to level characters when the process of questing is about as satisfying as making out with your sister – sure you get to second base, but at what cost? AT WHAT COST?!

This expansion being the World of Garrisons, and Blizzard finding some sick amusement in encouraging characters to be the shut-ins the players running them have become, of course they’re going to have some kind of pet battle function associated with the garrison. Because obviously.

Kephas has created a video that shows you the easiest way to unlock the pet menagerie in your garrison. So for all you Ash’s and Brock’s and various poke-battlers, check out the video and let your pet freak flag fly!

Apparently once you level this thing up, your battle pets can walk around your garrison. As if there wasn’t enough poop issues with followers, guards, workers, and only like two outhouses. It’s a good thing you can’t tame a full-sized mammoth is what I’m saying here.

Comments Off on Unlocking the Pet Menagerie in WoD