Patch 4.3 is only a few weeks away (doesn’t it seem like I’m always saying this?  Cause it feels like I’m always saying this.)  Another sweet piece coming out with the patch is the new Darkmoon Faire Island.  No, this isn’t a new level in some Super Mario game.  It’s the Darkmoon Faire like you’ve never seen it before (and by that I mean it’s good for something other than the Inscription decks.)
Basically it breaks down like this:  you play the various carny games and you get tickets.  You then use those tickets to buy vanity pets, vanity mounts, vanity (read: transmogrification) gear, and some heirloom items.
My thoughts:  people ragged on how Mists of Pandaria is stupid, campy, geared for kids and “those dirty casuals”, yet these same people are going to trip over themselves just so they can play dress up in old raid gear. OMG PRETTY!
Anyhow, it’s a nice diversion and some easy achievement points.

Comments Off on Patch 4.3 – The New Darkmoon Faire

I never thought I’d be “that guy”.

You know the guy I’m talking about.  I’m referring to that one person who is so vain and so worried about the appearance of their character that he’ll do all sorts of stupid, mindless things just to get that one piece of gear that looks “cool.”

Damn you Transmogrification.  Damn you for making me into that which I hate the most.

I’ve been people talking about getting their old Tier sets… wait, scratch that.  I’ve heard people talking about “mogging”, a completely fictional word that has caused a number of my brain cells to implode.  Anyway, I’ve heard people discussing how cool various tier sets look, but I’m not really into raiding so much.  Oh I probably could, but I just don’t need a piece of window dressing so bad that I’ll farm an instance repeatedly with a bunch of people, then have to roll on the one piece on the off-chance it drops.  Instead, I’ll farm something by myself, for myself, if I really want it so bad.  That’s how I roll, you see.

But never would I have thought that I’d be interested in farming Paladin gear for a Warrior.  What can I say, I like the Lucha Libre Helmet.  Luckily, this look-alike drops in a farmable zone.

For those of you who are like-minded (and possibly just a bit anti-social) who are interested in farming look-alikes of other classes teir sets, peep out Wowpedia for some assistance in that department.  However, if you’re one of those hard-core types and are planning to get your own tier set, Wowhead News had a great article on getting the various available tier sets.

I bet the RP sites are getting hits like crazy now that people are looking for different outfits.  Places like Warcraft Looks, Wow Fashionist. and The Visual Roleplay Gear List have listings of unique items and ideas, which is where I got the idea for the Helm above.  Also, another article from Wowhead News points out some unique-looking weapons.  Patch 4.3 will have people mogging all of –

I… I can’t believe I just used that word.  Damn you Transmogrification!

Comments Off on Patch 4.3 – Transmogrifying Is Addicting 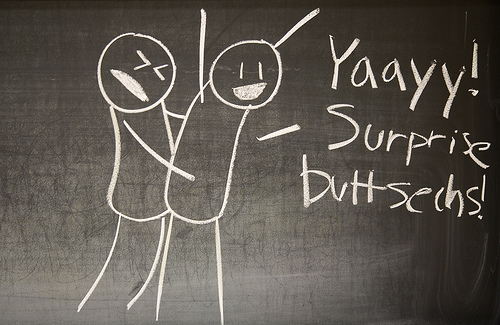 Okay, I think I’m done playing the guessing game with these clowns.

As has been stated in various locations across the Internet, Blizzard has thrown out plenty of hints and comments regarding release dates for Patch 4.0.1, as well as Cataclysm itself.  Much of that seemed to revolve around Arena Season 8.  If that’s the case, then Boubouille believes Cataclysm will be released by December 7(?).  He dug up some text that revealed that Season 9 will start on December 14.  Zarhym stated in a blue post that Cataclysm will be released a week before the start of the new Arena Season.

It makes sense.  Blizzard wanted Cata to drop before the end of Q4.  It’d be great if they managed to get it out before Christmas.  You know Bobby Kotick would love those Holiday dollars in his sweaty palms.  But I know, and those who don’t have their head in the sand know as well, that on release day we’re going to be downloading a big patch.  They’re still working on end game mechanics, and probably will be right up until the day Cataclysm goes live.

Patch 4.0 is the one I’m a little more anxious about.  It affects how we play, how we make gold, and how we see the game.  And by “we” I mean “me and my team of alts”.  Early October was supposed to be the day of the Big Patch, but the downloader message has had the date removed.  What does this mean?

At this point, I just want the patch to not screw things up when it comes.  I don’t want a bunch of broken mechanics and bugs stuffed into my computer, just so they can reach a deadline.  I want Patch 4.0, but I want to be able to start working with the content they give me.  There will be minor patches of course, but hopefully they’ve got things “right enough” for me to start playing.  It looks like they’re done with PTR tests with Patch 4.0.1, so October 5th as a patch day seems as likely as anything.

Whatever.  I’m not holding my breath for the patches or expansions anymore.  You can hold your breath, or Blizzard will hold it for you.

Not shown:  Bobby Kotick and a whole lot of plastic wrap.

This is Herculano.  You might as well enjoy the game now.  The changes will be here sooner or later.

Comments Off on Blizzard Likes Surprises