There are many words that come to mind to describe the UFC Women’s Bantamweight Champion, Ronda Rousey.

That’s right. The pound-for-pound greatest female fighter in the world also likes to kick ass in another world. That being the World of Warcraft.

Check out how the Champ spends a rare day off as she prepares to defend her UFC Women’s Bantamweight Title against challenger Cat Zigano. (Hint: she plays WoW.)

Not to be a creeper or anything, but here’s her Night Elf Hunter: Lunya. Quite possibly the only Hunter who could get away with wearing a ring with strength on it.

Comments Off on Ronda Rousey Plays World of Warcraft

Out of all the little side projects I’ve attempted in World of Warcraft, this one seems like it could be the most fun.  And by fun I mean aggrivating. I’ve decided to attempt the WoW Ironman Challenge.

The World of Warcraft Ironman Challenge.  Simply put, the goal is to level from 1 to 85 under the most spartan conditions. No buffs, no gear better than white, and if you die at all you are eliminated.

I pulled this from the Iroman FAQ, located on the official World of Warcraft Forum Boards:

The challenge started with the idea that the game has become too easy. It has become boring and there was no longer a challenge. This is often a common topic in the forums, well, at least in General. To a great extent, this is true. There is very little sense of danger. If you die, big deal, just rez. There is little sense of adventure. Why bother, you’re racing for end content. There was definitely an undercurrent that was looking for a different way to play.

With that in mind, the first nine rules were proposed that challenged players to level up with nothing but the most basic gear, without the benefit of talent points, specializations, buffs, professions (other than First Aid), no outside help. The biggest rule is if your character dies, you delete it and start over.  The rules have since evolved from the many discussions from these original nine but all changes always kept the original spirit of game play over gear, personal challenge over competition.

Needless to say, people have a hard time wrapping their heads around this challenge.  Why would you do it if there’s no reward at the end of it?  Why go through all that adversity if there’s no Achievement to show off to other people?  These “what’s in it for me” and arrogant jagoffs who won’t do anything unless they can brag to others about it (look at me l33t ghear!  What’s your gearscore n00b?) piss me off to no end.  Sure, video games are a great place for the insecure to hide behind pixels and dangle their horse-like ePenis.  But this challenge is not for them.  This is for people who want to challenge themselves.  Test their limits.   There are no bragging rights at the end, just the knowledge that they did it.  These people aren’t sheep, but they are pretty much insane.

I was not kidding when I said insane.  There aren’t many rules, just enough to kick you in the balls and send most people heading for the Exit.

Level from 1-85 using the rules below.

The following are allowed:

Piece of cake, I figured.  I can do this.  I rolled a Night Elf Warrior because:

a) I know the class, and

b) It would give me the chance to check out some of the Alliance questlines that I’d never seen.

Well he didn’t see much in the questline department.  This poor bastard was killed at level 6 just as he left the newbie zone.  He was killing a spider when a second one pathed close by and aggroed onto him.  He was at low health when the first spider died, and had one shot to “self-heal” via the Victory Rush ability.  He missed the swing, and the spider didn’t.

Sight-seeing be damned.  My warrior was killed via tourism, and that wasn’t going to happen again.  My next character was a Tauren Warrior.  Higher natural stamina, a nice thunder stomp, and off he went.  At level eight, he was killed by an elite that he happened to run by, mistaking him for just another Ogre.  Again, lack of self-healing was killer. That, and an Elite’s fist.

Attempt the third took me off the reservation.  I was out of the pocket, leaving my comfort zone for a class I’d never played before in my life – Tauren Paladin.  These guys were supposed to be cockroaches, notoriously hard to kill.  I’d put that to the test. 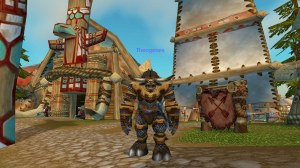 Theogenes was known as one of the greatest gladiators ever.  He was undefeated his entire career (1425-0), with defeat meaning death.  What better name for a character undertaking the WoW Ironman Challenge?  Currently Theogenes is sitting at level 14.  Time, and patience, will dictate how much further I can take him.

I will post significant progression, as well as some tips for other people who want to try out the WoW Ironman Challenge.

Comments Off on I Am Ironman