Patch 6.2 will be rolled out tomorrow, and that’s going to crack open some new options as far as making gold goes. There’s Felblood that needs to be farmed from Tanaan Jungle. Profession daily mats are getting buffed. The WoW Garrisons website has a great guide that you should check out if you want to actively improve your gold-making garrison, with a dash of farming goodness on top of it.

Me, I prefer a more passive approach to garrison gold making. I’ve got six alts (possibly seven in the near future) that I have to run through to produce gold. I could make more if I really wanted to milk each one, but I just don’t have the time. I prefer to have my garrisons in a “set it and forget it” mode. Log in, collect the mission rewards, send more followers out, log off. Every couple of days I’ll go through and open/vendor the salvage crates. It’s that easy.

Question: Vendor the salvage greens? Why not put them up on the AH and get a slice of that sweet transmog pie?

Answer: Because I lose money every day it doesn’t sell. Sure it might go for ten times the vendor price eventually, but for me I prefer just taking the quick cash out and no loss. With zero effort to get, 5-50g for a simple click of a mouse is sufficient. I’m not greedy.

So for Patch 6.2, this is my set up for almost every character:

I do have one character with double gathering professions. If he is going to farm Felblood in Tanaan Jungle, I’ll make sure he has Stables at Level Three so that he gets the mount speed, can’t be dismounted and stunned, and can mine/herb while remaining on the mount. This could be made even more interesting once he gets flying, assuming he’s still doing this by the time Draenor flight is unlocked.

This has been one of the most productive weeks in WoW that I’ve had in months.

I had a real coming to Jeebus kind of moment last weekend. I decided that it was time to focus and actively do something with these characters that I had spent time leveling up. My attention turned to gold, as it so often did. I felt I could make the most of these characters that I was barely using… well, passively useful if nothing else.

The plan was this: I took my five Lv 100 Hordies and made sure that each of them had a Level Three Salvage Yard (for the green items) and a Level Two Inn (for the Treasure Hunter followers). I would log in on each character, gather any gold rewards from follower missions, send it to my AH alt (to track progress) and log off. Salvage items would be cashed in on the weekend. No profession daily cooldowns, no mining or herbs. This was all about making gold.

Then Deathrokk went and changed the game. 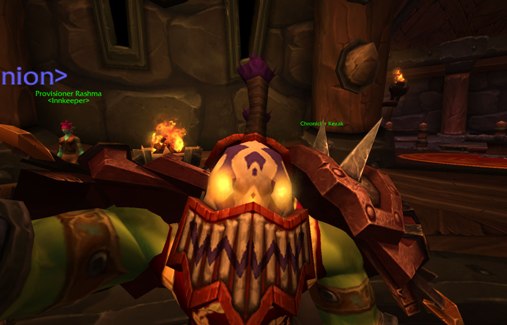 Deathrokk was the first character I was able to get to qualify for Heroics by completing Proving Grounds (Silver). He began running the Tavern quests, unlocking the achievement “Stay Awhile and Listen” which also unlocked the Level Three Tavern plans. Behind those doors lay the Treasure missions for the garrison followers.

Soon every character was sitting with a Level Three tavern. Did it matter all that much?

From Monday to Friday, checking each character maybe 2-3 times a day to refresh follower missions, I made 7457gp. That’s five days, with 4-5 characters, spending maybe two minutes per character. Deathrokk wasn’t sending gold for a couple of days because he was trying to save enough gold to get a Level Three Lumber Mill. Gotta get those resources up to send the followers out, and when you’re focused on Treasure Hunter traits rather than Scavenger traits, it’s easy to start falling behind in resources. That gold number also doesn’t include Salvage crates, which I will unpack on the weekend. Everything in those crates will be vendored, regardless of iLevel. I know some people prefer to DE the higher level gear, but I’m looking for immediate gold.

Speaking of Deathrokk, since I was doing the Tavern quests I eventually got the quest “Aviana’s Request“. The reward for that was Aviana’s Feather, which is probably as close to flying as one will get in Warlords of Draenor. And I must admit, it’s a good look on him.

If the Angel of Death is considered a good look.

So for those who are looking to make easy gold while garrisons are around, get yourself a Level Three Tavern/Inn, a Level Three Salvage Yard, and make bank. Those are the best buildings for making gold in WoD.

Comments Off on Golden Wings and Golden Pockets