If Blizzard Made Me An NPC

PVP is no joke. Most people know this, given the amount of folks who actively avoid getting involved with it if at all possible. I dabble in the digital violence now and then, but I prefer to watch those skilled at it while they do their thing. Two such individuals are PVP icons Bajheera and Swifty. As recognition for their contribution to the World of Warcraft community, Blizzard will be giving them their own NPCs in Warlords of Draenor – Jackson Bajheera and John Swifty.

It made me consider the question – if Blizzard turned my character into an NPC for Warlords of Draenor, what kind of NPC would they make him – not what I would make him. The NPC would reflect the character’s in-game activity. Auction House vendor? Pet Battle Trainer?

I had a couple of thoughts. Maybe he could be a quest hub NPC, but that role is already taken. 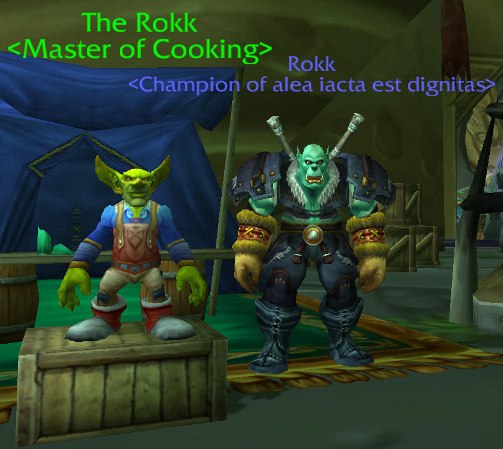 If you smell what we’re cooking.

There’s not really one thing I do in-game. I can’t pigeonhole my playstyle. I quest and PVP, I run dungeons and scenarios. I play the Auction House and pet battles. I do everything but raid, and that’s due to a mix of inexperience and having a computer that probably would drop a big poo as soon as the boss was pulled.

So my NPC would probably be a rare spawn mob. He’d walk alone, but he could show up anywhere. Silver dragon elite, and his drop table would be extensive and random. You’d loot “Rokk’s Box” and there could be anything in it – from gold (reflecting the AH and gold farming aspect) to dungeon/pvp gear (that would reflect the iLevel of the applicable unlocked dungeon given the level/zone he’s found in). He could also drop a rare battle pet which would be a miniature version of himself called Smackdown.

It’d definitely be a hoot to go one-on-one with the Main Monk in WoD. I think a therapist could clarify if that would make me suicidal or just “a little off.”

What kind of NPC do you think your character would be?

Comments Off on If Blizzard Made Me An NPC