Catching up on Alts with Patch 8.3 | World of Warcraft

Earlier this week, Blizzard announced that they would be introducing a 100% XP bonus in World of Warcraft. I hadn’t logged into the game for weeks and, honestly, still had little desire to do so. But being between RPG sessions, and being on COVID lockdown, I thought I’d give the game a try once again. Even if it was just to toss some Hexweave Bags onto the AH for easy gold.

First, Hexweave Bags have tanked. I make more money on the barns used to produce the furs to turn to cloth to MAKE the damn bags. So, fun.

Second, I had moved some alts around which gave me fewer 120 alts to run the 2000gp World Quests on. Maybe I would grudgingly take advantage of the XP boost to get at least one leveled up and geared to run World Quests.

Sure, the leveling part is… leveling. But is there a quick way to get reasonably geared once you reach 120? Kelani produced this great video which dives into that very question. So check it out won’t you?

Comments Off on Catching up on Alts with Patch 8.3 | World of Warcraft

Fellas, it’s like the ladies tell ya – it’s all about making the most of what you have. Especially when it comes to what you’re packing. Equipment, your gear is what I’m talking about here, and not the kind that can be buffed with Extenze.

Clothes make the man, or Orc, Gnome, what have you. Much like in real life, I try to have one outfit that will work in multiple situations. In game, it’s called being practical. In RL, it’s called being lazy and/or style deficient.

Hypedown, the PVP Unholy (and occasional Frost) Death Knight wrecking machine, made a discovery recently that allows certain items of PVE gear to be used in PVP situations without it being scaled down. It’s crafted gear too, so with the right mix of professions and elbow grease it’s possible to outfit your character with goodies that will not only be amazing-balls in PVE, but you can jump into PVP and not have to worry about replacing those items.

The rings and necklace Hypedown discusses are primarily for Frost Death Knights, but you can find any of these items with the stats you need for whatever class you play. So peep the video, pick up some knowledge, and go get them upgrades!

There are changes coming to this blog. The first of which is the URL  (rokktalk.wordpress.com). It was either that or pay GoDaddy for the official URL. That may still be coming, but Rokk Talk has been the blog for long enough that it justified some changes.

The next change will be the theme. The idea of the blog isn’t just for me to chat up my toons. No, the idea is for my posts to help people out in some way. If people find them entertaining, great, but first and foremost they should be helpful in some way. Leveling tips, gearing up, making gold, I’m constantly surprised by people who are still asking questions about these topics. I’ve posted plenty of information about these topics. Problem being, it’s not the easiest to find on the site unless you search for it.

So if you’ve found my little World of Warcraft blog, welcome. Welcome to Rokk Talk (soon to be 2.0).

Comments Off on Changes to Rokk Talk

Turns out Garrosh is a bit of a jerk. Who knew!

It all started because I wanted to fly.

Flying in Draenor has been tucked away behind the Draenor Pathfinder meta achievement. Since I’d torn through the content so quickly, things like the Loremaster component had been left quite unfinished. So Deathrokk started questing through Nagrand to check that box on the meta achievement.

I’d heard about, and seen clips of, The Cutscene. I’d actually thought it happened in Spires of Arak. Lo and behold, there it was at the end of Nagrand.  We all know that Thrall kills Garrosh Hellscream, but what I didn’t know is what led up to it. Turns out, it’s part of the quest “And Justice for Thrall“. You run the quest, fight Garrosh, and then Thrall steps in to bat cleanup on Garry.

And he cleans up big time.

Something happened during that fight. Like I said, you start the encounter by throwing down with Garrosh. He cheats, you’re stunned, and then Thrall kill-steals. A dick move, but let’s be honest here – Thrall can be a bit of a dick. Double so for me because I was actually winning that fight. Garrosh was down to 50% when he stunned me. I was at maybe 98% health. Thrall stole my kill, and as you can see in the video Garrosh dropped Gorehowl.

I saw it in the video. And I wanted that axe.

Since I couldn’t pry it from Garrosh’s cold, dead, electrocuted hands I had to go with Plan B – back to Karazhan. Back to dealing with that pain in the ass chess game. All for a shot at Prince Malchezaar, who is keeping my axe warm for me. Well he didn’t drop Gorehowl this time, but since I’ve got everything else except for one Apexis daily that I need to wait for, I’ll take my time and wipe out Kara every chance I get until Gorehowl is mine.

Comments Off on Thrall Stole My Loot 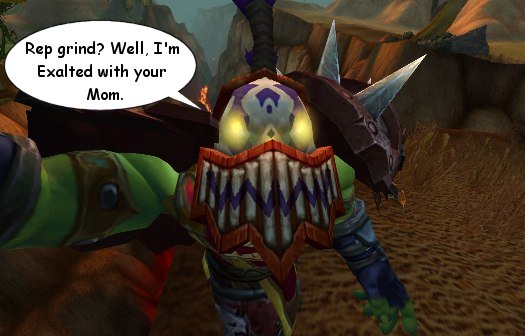 The Grind is Real.

Patch 6.2 – Okay, I don’t mind it so much. I haven’t done a damn thing with the shipyard, so screw that noise. Let’s get to it.

I said I wasn’t sure how the garrison nerfs were going to affect the passive gold making routine I had going. I’d heard bad things, and I wasn’t sure if last week’s numbers were an indication of said nerf. I had a few more days off during the week, so I made sure to log in at least three times a day. This gave me more shots at rewards, from scrapyard bags to crates to straight up gold. Turns out that it was a good move on my part, since my seven day total was 29,288g!

Busy week. I started off working on the Tanaan Jungle rep on my monk, but ended up switching over to Deathrokk who wrecked shop on everything. Between Blood Death Knight awesomeness and Custom premade groups, Deathrokk has done quite well for himself. He’s Honored with the Headhunters, and Friendly with the Awakened and the Saberstalkers (due mostly to grinding groups.

This has been a very educational week both for good and for bad.

We’ll see how the garrison holds up, not to mention my patience with the rep work. I’ve already switched the character focus once. However, Death Knights are beasts so I think I’ll be sticking with Deathrokk for the duration of the grind.

Comments Off on Weekly Wrapup – Deathrokk Steps Up