Had to take a picture to remember even being there.

As with most things I do, it isn’t until after I finish something that I realize there’s something more there to discuss. Sometimes I’ll backtrack, sometimes I’ll address it in the future. I mentioned things in the last Alpha to Omega post that I should have put a bit more focus on. I feel there were topics that just didn’t get their due attention.

Take now, for example. Specifically the Elixirs of the Rapid Mind. This is great for leveling when you’ve been through the process a few times, give or take a dozen. I was actually starting to get to that leveling burnout point with Odingreen once he’d reached level 73. I was so tempted that I mentioned my dilemma on Twitter, hoping to stir some kind of conversation or at least get some feedback. 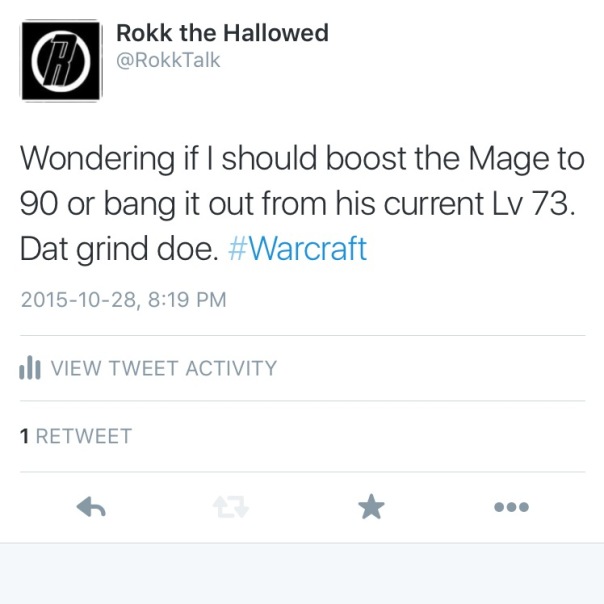 The retweet was nice at least.

So to help to get through the leveling grind, Odingreen bought a few of these elixirs from the AH and put them to work. As I mentioned in my last post, they really helped me push through the burnout wall.

Now that Odingreen had jumped into a new pool of content, the question became how to make the most of these elixirs in Cataclysm content. We’re talking five levels here. How fast could Odingreen get through those levels using the Elixir of the Rapid Mind?

Answer: Less than an hour.

There are guides on Youtube, quite a few in fact, for leveling quickly through Cataclysm. The key to them, so they say, is by grinding dungeons under the influence of the Elixir of the Rapid Mind. But those videos, for the most part, are a bit misleading. What these videos forget to mention is that for the dungeon crushing to be effective, you also need a level 100 friend to carry you through them. He (or she) kills the dungeon while you either stand at the entrance, or follow behind at a safe distance.

Of course, if you have a well-geared friend who is willing to subject himself (or herself) to this, then by all means go for it. However if you’re solo for whatever reason (we’re all friends here, we don’t judge), then just pop an E of the RM and quest. It might not be as OMG WFT BBQ fast as being carried repeatedly through dungeons, but it’s still pretty damn silly fast.

As far as Cataclysm content goes, well here’s some “sage” advice from the Muscle Mage himself, Odingreen.

Elixir of the Rapid Mind + Heirlooms = powerleveling in a bottle.

Comments Off on Alpha to Omega – Cataclysm

TGIF – The Gold I Find, because Hells Yes I’m broke.

If there’s one thing that stays constant through the years, it’s that the toughest time to make gold is at the end of an expansion. Profession swag like gear and potions tends to go down because people either don’t play as much, or are already geared up. They may need stuff for alts, but by and large you’re not going to be raking in the cash like you were before.

Farming for gold can be a little more lucrative, depending on how and where you’re doing it. Transmog gear is always going to be worth something, and the raw mats you pick up also tend to sell. If you decide that you want to do some farming, you need to find somewhere that you can run through quickly, yet still produces drops that will make you gold on the Auction House.

Bastion of Twilight is ambitious, but it can also be quite lucrative. If this is your first time farming, or I don’t know, maybe you’ve been away from WoW for a year and forgot how your abilities work, BoT might not be the best zone to get your feet wet in. What you’ll find is that those wet feet are soaked with piss and blood. Yours.

If you have the gear for it, or just want to feel like a rock star killing green elite mobs at level 90, BoT can be a nice place to hang out.

Comments Off on TGIF – Bastion of Twilight 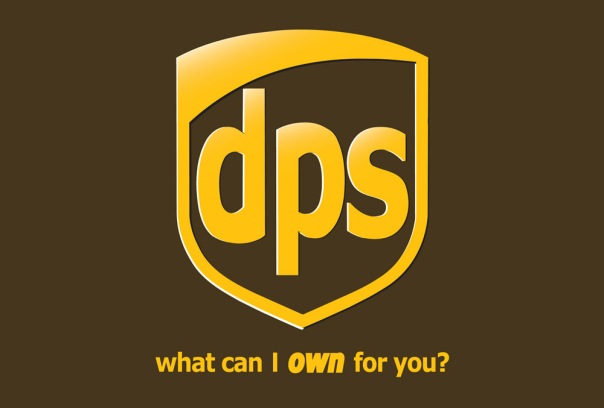 With gearscore now being used by Blizzard to determine who gets into Heroics, what you wear is almost as important as what you do. Having run some of the regular instances, I can tell you that you want to be on your toes when you step into a Cataclysm dungeon. You want to be smart, and still manage to pour out mass quantities of sustained DPS.

You also want to pick up some decent gear so you don’t suck.

Now, if you’ve done what Blizzard hoped and actually gone through the entire questline in each of the new zones, you will have at least Honored rep with the applicable factions. That’s enough to buy a tabard, as well as pick up a piece of gear or two that might help your stats. This is a list, originally compiled by WoW Insider’s Warrior columnist Matthew Rossi, of the rep items you should look at picking up. The list was designed for Warriors, but Death Knights can benefit from the selections as well. If you’re interested in tanking, Rossi included suitable tank gear in his original post.

Good luck to you, and enjoy the Cataclysm.

Comments Off on Cataclysm Rep Gear for Plate DPS

One Week of Cataclysm

On December 7th, World of Warcraft released their latest expansion:  Cataclysm.  In one day, Cata sold 3.3 million copies and became the fastest selling PC game in history.  I was one of those people who bought the game.  That means I helped make history.  Therefore, I am awesome.

I am not so awesome as to take time off to play a video game, if such behavior would be considered awesome.  Mostly because I have been taking a course for the past month and could not take the time off for any reason, except possibly for death.  Even then, my next of kin would have received a strongly worded letter of reprimand about me missing a day.

One week later, between days in class and studying for tests every other night, I have managed to get some hours in-game.  This is how I spent my time.

– I braced myself for server crashes that never came. This has to be Blizzard’s most seamless expansion release.  Seamless, aside from the level 80’s not getting XP for the first 30 minutes or so after the release.  Not a big deal, unless you were one of those folks who handed in 25 daily quests during that time and received zero XP for their efforts.

– I didn’t even try to log on with my Earthen Ring characters. It’s a “Server Population:  High” situation on the best of days, which meant queues.  During the first few weeks of Wrath, waits of 15 – 45 minutes were not uncommon.  Screw that, said I.  On top of that, ER is Horde-heavy (hi AIE). I’d still be fighting Horde folk for quest mobs and the like.

– Also, he was the only 80 that had a gathering profession. I knew people would be rushing to get world or realm firsts so I started mining and putting stacks of ore up on the AH. In one week, spending about 30 minutes a day doing mining, Big Blue had netted almost ten grand. This was AFTER spending 4k on 310 flying, and 250g on Old World flying.

– Herc the Blue hit the new content HARD. How hard? Not only did he ding 85 on Sunday, but along the way he picked up the Achievements Coming Down the Mountain, Deep into Deepholm, and Unearthing Uldum. If I was so inclined, it wouldn’t take much more effort for him to finish off Loremaster of Cataclysm.

– Big Blue has maxed his Mining profession and had started work on Blacksmithing, Cooking, and Fishing. There’s money there too if you look for it.

– I haven’t done a single dungeon run yet. I’m going to finish the Twilight Highlands questline, then go back and pick up rep gear to fill in any spots I might be able to upgrade. At that point, I’ll be ready for the repeated sodomization that is Cataclysm dungeons.

That’s my time in a nutshell. How have YOU spent your week? What have you liked or disliked about the expansion so far?

Comments Off on One Week of Cataclysm

In today’s economy, jobs are very hard to come by.  In Azeroth, things aren’t much better.  Any day now (like Tuesday), the land will go straight to Hell once Deathwing kicks the front door down and demands the World go make him a sammich and don’t make him tell you again.  He’s going to make Azeroth into his own giant toilet (except Northrend – he, like me, hates snow and would most likely say “I wouldn’t waste a drop of piss on that continent if it was on fire… like the rest of the World”.)  This destruction will cause a drain on the economy as both Alliance and Horde start their turf war all over again in a battle for resources and prime vacation spots.  Who knew that Thousand Needles would become top dollar lakefront real estate property?

However, not everyone is fretting over the upcoming near-global destruction.  Questgivers gave a big hoo-rah because they were being given more quests (as well as removing some old ones).  But what does this mean for folks who are trying to get the title of Loremaster and just can’t finish it before The Shattering?  Well a little bird (and by that I mean a Blue Poster) had this to say on the subject:

As you’re all aware by now, the shattering of Azeroth will drastically and permanently alter the continents of Kalimdor and the Eastern Kingdoms. In the wake of Deathwing’s devastation, adventurers will be summoned to embark on new quests from levels 1 to 60 in these transformed territories — and with so much new content to be found on these original two continents, many original quests will no longer be available after the shattering occurs. These quests will automatically be removed from your quest log, while any quests you’ve accepted that still exist in Azeroth will remain in your log.

In addition, the Loremaster achievements are being redesigned slightly to make them easier to track. Rather than having players complete a huge number of quests throughout a single continent, the criteria will change so that you will instead need to complete a set number of quests in each zone. Once you’ve earned the achievements for each listed zone on a continent, you will then be awarded the Loremaster achievement for that continent. For those who do have Loremaster of Kalimdor or Eastern Kingdoms completed already, you can still go back and get the new achievements for questing in individual zones on those continents.

We look forward to giving you an opportunity to take on brand new adventures in these classic zones. The times they are a-changin’.

Wow.  Not only is Deathwing ripping up the planet, but he’s pissing off Lore nerds too.  That’s just mean.