I have to get some sleep, since I have to leave for the airport in two hours and I’ve got a long day of driving in front of me.

– Apologies for the poor update, but the arena matches really hooked me this year.  Also, I had to go shopping for a birthday present, then ship it home via UPS along with some of my swag.

As to be expected, today was a big day.  Let’s get right to the highlights, shall we?

– New playable race:  Pandaran, which can choose to join either the Alliance or the Horde after Level 10.  They can be any class except Death Knight (they weren’t around during the Wrath of the Lich King), Druid (Bear taking Bear form?),  Warlock (Zen Bears don’t conjure no demons), or Paladins .

–  New playable class:  Monk, available to all races except Goblins and Worgen.

– New zones:  Continent of Pandaria, which will have a city with an AH.

– Characters will automatically learn spells in the field, so no need to go back to the trainers except for changing skills.

– Pet Battle System:  Full-blown Pokemon setup.  You become a Master of your companion pets, level them up and have them battle other companion pets.  WoW Pokemon.

– Checked out the Costume contest.  Jay Mohr hosted, and was much funnier this year than last.  He probably wrote his own material this time.

– Costumes were great, aside from the Minecraft guy and a Night Elf wiping out on stage.  If fans are not going to be dissuaded from putting together big, bulky costumes that restricts their movement or vision, Blizzard needs to set up better stage ramps.

– The winner deserved to win: 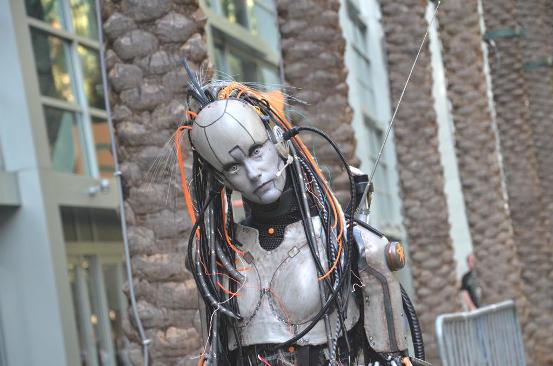 – When the dance portion of the contest started, I pulled the pin and went to play the starting zone of Mists of Pandaria.

– Played the Pandaran newbie zone.  Got my Panda Monk up to 6 before my time ran out.

– Picked up some vittles on the way back to the room.  Decided to lay down before going to the Twisted Nether meetup.

– Fell asleep.  Woke up and checked the live stream, just to see  them drawing the raffle prizes.  Missed the one event I’d been looking forward to.

Thoughts on Day One?

Blizzard wanted the next expansion to have a lighter feel.  It’d been pretty heavy over the past few expansions, fighting one Big Bad after another.  Some people are going to either love MoP, or they’ll hate it.  I’ve already seen people ragging on the new race (Kung Fu Panda lol) and the Pet Battles (Pokemon lol).  I think it’ll be fine, and I’m going to get it regardless.  I might not play a Pandaran myself, but I don’t care one way or the other.

I didn’t have to wait in line this morning.  I got there a little after 9am and they let us right in.  Maybe they opened the doors even earlier because it was cloudy and looked like rain.  I approve in any case.

This evening sucked balls.  Sleep sucks.  I am so pissed off.

A rough day, and Blizzcon 2011 hasn’t even officially started yet.

This is my second Blizzcon, so I had a strategy in my head before I’d even set foot on the first jet.  But as is often the case, Mr. Murphy (of Murphy’s Law fame) had a strategy of his own.

– Flight to Minneapolis was smooth enough.  I was running on only a few hours of sleep and hoped to get some on the plane, but that wasn’t happening.  So be it.

– Minneapolis / St Paul airport is big.  Big enough that by the time I got to the gate for my L.A. flight, it was time to board.  Fack.

– Landed at LAX, caught my shuttle with no problems.  It was filled with Blizzcon attendees.  I knew this because we were all staying in hotels close to the Anaheim Convention Center, and when the driver asked if there was a convention going on he was answered with an awkward “yes.”  The uncomfortable silence on the way to the hotels was tangible.   I used that time to try and squeeze in a few minutes of sleep.

– After arriving at the hotel, I needed a shower, food, and a nap.  It was almost 4 (local time), I’d been up for over twelve hours, I was tired and hungry, and I felt worn out.  I was going to get my pass later in the evening to avoid the huge lineups I dealt with last year, so I had some time to kill.

– Went to turn on the shower.  No go.  There was no water.  Tried the sink & toilet.  Nothing.  Called the front desk and was told a pipe had burst.  Wonderful.  Decided I might as well go to the Convention Center to get my pass.

– Practically no lineup when I arrived at the Convention Center at around 6pm.  It took me longer to get to the line than it did to go through it.

– On my way out of the Convention Center, I was stopped by a young lady who wanted to buy my Murloc card pet.  Probably should have sold it, but didn’t.  Maybe I’ll use it as a prize on the blog here.  Stay tuned!

– Got back to the room.  Water had returned!  The shower was delightful and much needed.

– Considered a nap, but ended up in more of a vegetative state while I watched Slither.  Curse your awesomeness, Nathan Fillion.

– I was bagged but didn’t dare nap.  I knew that if I closed my eyes, that was going to be it for hours, maybe the evening.  An unacceptable option; I had two meetups that needed to be attended – the WoW Insider meetup, and the AIE Guild Hall.

– Invigorated, I attended the WoW Insider meetup.  I saw Felicia Day and Robin Thorsen, not to mention the WoW Insider crew.  Most of my time was spent in bar lines though – 45 minutes just to get a beer is stupid.  Hopefully I’ll get to visit with more folks tomorrow.

– Didn’t even get to make it to the guild hall.  Stupid beer lines.

– Got back to my room and found out I’d been locked out.  The front desk claimed to have been “trying to get ahold of me” somehow, to tell me they’d put someone else in my room.  I got my keys reactivated, was let back into my room, and found an extra rollaway bed waiting for me.  No roommates for me though!

– My Flatliner creation is still keeping me up, and it’s well after midnight local.  I’ve almost been up for twenty-four hours.  I may throw on some shorts and go for a walk to Denny’s or something.

Despite all of these events, I’m still pretty stoked about Blizzcon 2011.  Can’t wait to see what the big announcement is going to be tomorrow.

Comments Off on Blizzcon 2011 – Day Zero

Blizzcon 2011 is only a few days away, and if you’re like me you are stoked to be going!

Also, if you’re like me you haven’t given any thought to what you’re going to pack.

Usually in situations like this, I will procrastinate until the night before I leave and just shove everything into a bag.  But not this year.  This year I am thinking ahead.  My master plan involves:

Comments Off on Packing For Blizzcon 2011

Blizzcon 2011 Ticket Sales – Round One

With all this talk about the World supposedly ending today, I almost overlooked the fact that Blizzcon 2011 tickets go on sale at 10am Pacific (Noon CST) !

I’m banking on the fact that the pending Rapture will distract people from spamming their F5 key until the Blizzard Store releases the tickets.  Getting a good spot in the queue all boils down to server lag and luck, and there’s just enough lag between California and the belly button of Canada to cause me endless grief.

Come on Blizzard!  Just let me buy your grossly overpriced ticket, damn it!

Comments Off on Blizzcon 2011 Ticket Sales – Round One