In retrospect, I think I deserved the nipple on my forehead.

I’d been playing the Pathfinder RPG for the past several months in a home campaign that my cousin was running. He’d wanted to GM the Curse of the Crimson Throne adventure path for quite some time. It was his first time running the show, and he’d been doing a great job. But as was often the case, real life kept getting in the way and our get-togethers were only once or twice a month at best.

My brother wanted to get his geek on a little more on the regular. One day, he asked if I’d be interested in giving Pathfinder Society play a shot. I was somewhat familiar with it, as far as it being more of an “official” style of play. Only Paizo products (Paizo being the company that created the Pathfinder RPG) were allowed, and certain other rules were in place for more of a structured playstyle. You actually registered as a player on the Paizo website, and the character you created could be used in any Pathfinder Society game across the globe.

“Sure,” I said. “Why not? It’s not really much different than what we’re doing now. We’d just be doing it with a bunch of strangers.” The awkwardness of that statement hit me as soon as the words fell out of my mouthhole.

It was agreed. We’d both make characters and give it a shot. I’d done a little bit of research on Pathfinder Society. Research that consisted of a search on the Pathfinder Reddit board, and a quick scan of the Pathfinder Society manual. No big deal, I thought. My brother was hip to the game mechanics. If I got hung up on something, I’d just ask him and we’d keep on rolling. Like I said, no big deal.

If I may, I’d like to take this moment to pull a quote from the iconic TV series, the Simpsons – Don’t Do What Donny Don’t Does. 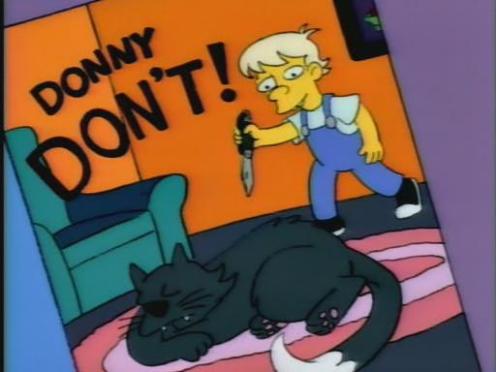 My first mistake was thinking I could learn as I went. Here’s a tip – If you’re going to a PFS game for the first time, whether it’s at a Gamecon or a get-together in the attic of the local hobby shop, Know What the Hell You’re Doing. There may be game mechanics that you’re not familiar with, but at the very least you should know the basics for your class. Various combat or skill mechanics relevant to your character.

PFS Scenarios are usually on a time schedule of about four hours, and the other folks at the table don’t want to have to wait while you hum and haw about not knowing how to do something. Depending on the table, players will probably help you to a certain degree, but it doesn’t hurt to be proactive. Be respectful of their time be knowing how to use yours.

For the next two weeks I tried to nail down the character I was going to use. My brother and I were going to play brothers (innovative, right?) and barbarian brothers at that. Not necessarily the class, but characters somewhat based off of one of our favorite B-movies of all time entitled “The Barbarian Brothers.” 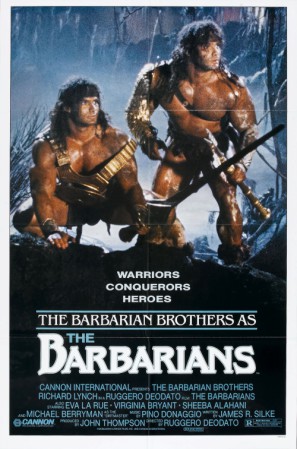 They left their acting in their other loincloth.

My brother’s character, Kutchek, was a Bloodrager. Definitely barbaric, and really fit the “I just want to smash things” feel he was going for. I, however, wanted to do something a little different because I didn’t want us to be seen as the two noobs who showed up with the same characters. I took our backstory and put together an Ancestral Oracle named Gorr.

This was completely new to me. I loved what I read about the class, but I’d never played an Oracle or even built one before. I couldn’t dig up a good build for that specific flavor of Oracle on the Internet, but I didn’t care. The build was rich in RP. He had the ability to buff his armor (protected by ancestral spirits)  and create a family weapon artifact out of thin air (the God Killer, a weapon used by the descendant my brother and I used to develop our characters.)

Now I had read that there wasn’t a big emphasis on roleplay for Society play. You had four hours to complete the scenario. That wasn’t a whole lot of time to do the mission AND reflect on your character’s troubled history.  But I felt that I could shoehorn it in and maybe try to be memorable to the other players at the table.

Turns out that was pretty on the nose.

There were four of us at the table, as well as the GM. The scenario began, and there was a moment where we were to introduce our characters. My brother and I played our RP card and played it hard. When we were done, the other two players stared at us, then delivered a few sentences. Short but sweet and we immediately knew what we needed to about them.

I thought to myself, “Did we overdo it?”

Then the fun began, or as I like to call it, “Donny Don’t Know Shit.”

Anyone who has played an RPG knows that there’s growing pains when you make your first character. Things look good on paper, but when the rubber meets the road you find out pretty quick what works and what doesn’t. Your first play session is usually ugly, unless you’re playing a class that you’re very familiar with.

Unfortunately for me, I was showing my ugly play in front of complete strangers. I was playing a character that I knew zero about except what was on paper. I’d used Hero Lab to create the character, which made the creation easy. But I hadn’t read much of  anything about what the abilities did. I found out a number of things very quickly, and most of it was that the abilities I’d selected didn’t work. The “spirit protection” armor didn’t stack with the armor I was wearing, so it was useless. The “spirit weapon” never got summoned because I was scrambling like a chicken with its head cut off and never thought to summon it. The spells I’d chosen were somewhat beneficial to those I buffed, so it wasn’t a total loss. But when it came time to drop a heal, I healed the group’s monk rather than my own brother (who was down and unconscious) because I didn’t want to seem like I was playing favorites with my own kin.

What a shit show. How I breathed with my head that far up my ass, I still don’t know.

The crowning moment of the gong show happened right in the middle of an encounter. A nasty goblin lobbed a vial of some strange goop at me and it smashed against my head. “Roll a Fortitude save,” the GM said almost dismissively, clearly expecting me to make the save.

On top of everything else that was falling apart for my character, my luck with the dice had been abysmal. That streak continued when I failed my saving throw.  One of the other players at the table, a GM who had run the adventure a few times before and was playing this time just to fill out the group, smiled and said, “Oh no.”

For a brief moment, I hoped it meant Gorr was dead. It seemed the only way out of the hole I had dug for myself.

The GM smiled as he read the text block beneath the goop description. His was the smile of a man who never got to unleash this particular can of whoop ass because everyone else either avoided getting hit, or managed to make their Fortitude save. “The toxin begins to warp your flesh,” he said. “No one will ever mistake you for your brother again as a nipple begins to grow on your forehead.”

A nipple. In the middle of my bald character’s head. “Like, just a nipple or…”

“Oh no,” said the GM. “Areola, nipple, all right there in the middle of your forehead.”

My humiliation was complete. I could feel my own forehead start to glow red.  It was bad enough that Gorr – no, I – was failing miserably. Now this. I just wanted this to end.

Luckily my brother picked up my slack. Kutchek’s smashing skills were impressive, and our group mowed through most of the encounter. After disposing of the Big Bad, the GM started reading the flavor text conclusion to us while everyone else packed up. We filled out our Chronicle sheets, and got the appropriate signatures verifying what we’d written down. The GM added a note onto my sheet since I didn’t have the gold to heal my nipple-ism.

“Has a nipple on his forehead,” he wrote almost apologetically. He looked at me. “That’s the kind of stuff real stories are made of,” he said. My brother agreed. I smiled, defeated, and just wanted to get out of there.

Here’s another tip. It’s a game. It’s all about having fun. Sometimes the dice go your way, sometimes not. Enjoy yourself. It’s not like we’re developing the cure for anything.

Looking back, my stupid reaction was one of stupid hurt pride. I’ve been playing these games since the Dungeons and Dragons Red Box came out in 1983. I’ve fought dragons, gods, aliens, and armies. But walking out of the hobby store with a sheet that said my character had a nipple on his forehead seemed fitting because I felt like I’d played as if it was the first time I’d picked up a d20.

One of the great things about PFS play is that they take into account the Level One mishaps. You are allowed to change everything about your character except his Society ID number. I took advantage of that almost as soon as I got home. I didn’t exactly do a full wipe. I did change a few things, and made sure I understood my character much better.  Less fluff, more function.

My schedule opened up, and as luck had it there was another Society game with some openings. My brother and I signed up. I was more stoked to go this time than I was before. I’d learned. Grown, as a player and a person. Gorr was ready to get out there and really make a difference for the Pathfinder Society.

And hopefully earn enough gold to get that nipple off his forehead.

Posted on October 20, 2017, in RPG Actual Play and tagged Pathfinder RPG, Pathfinder Society. Bookmark the permalink. Comments Off on Menace to Society.