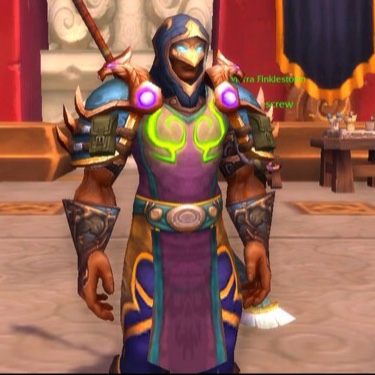 Oops I did it again. I leveled a toon. Got lost in the game.

My monk was a character I was just going to level once in a while. It was not my intention to get him maxed out in short order or anything like that. No rush in getting this guy to 100. Just casual. Yeah, casual.

As you might imagine, he’s coming up short on cash. I did have a couple thousand gold, but I burned that up buying old justice gear to use for transmog. He had to borrow to get his 280% flight.

Therefore, I wanted to find a way to pause and pick up some scratch. Get a bit of a nest egg started. I know I’m going to need 5000g for a maxed out garrison. I’ll probably need more gold before that. I want him to pull his own weight, which means farming. And all the popular farming spots are Pandaria or higher, which is not exactly viable for an 85 character.

Oldbess offered up this video outlining some easy twink gear to farm. Mobs were level 19 or so, easy enough to run and run fast. Potentially some cash to be had here. I’ve never been a fan of using transmog gear to make cash. There’s too many variables involved – server size, personal preference – for it to be considered reliable income. Sure, if you get lucky and happen to get one of these pieces to drop, you can make bank. But someone has to actually buy it for you to make money, and that piece of sweet transmog can sit on the AH for quite some time before it finally goes.

Anyhow, check out the video because Oldbess is solid for gold tips and despite my feelings on farming twink gear, it’s a good piece of gold-making cinema.

Have you tried this spot? Has it worked out for you? If you’ve farmed Shadowfang Keep let me know in the comments below if you made some nice scratch there, or if it came up flat.