← Alpha to Omega – Warlords of Draenor
Dwayne Johnson on Depression →

The Noble vs The Defiler

No, I don’t mean that as an acronym for the game about which I blog, or journal, or whatever this is. No, I mean wow as in wowsers, I can’t believe I did it.

What is “it” you might ask? Well if you have to ask you haven’t been paying attention. Also, welcome to my blog-thing person who is showing up for the first time. At the beginning of October, I started leveling a Mage. Why, you might ask? Well there was a few reasons. My day consisted of garrison and ship missions (which actually didn’t involve me doing anything at all) and running Tanaan jungle quests to improve gear for no real reason. I had completed an LFR raid because I was more desperate than intimidated (coincidentally the same reason I got together with my current fiancee).

After killed my first raid boss ever, I wanted to try something totally new. I’d never leveled a cloth-type character before, so my new task was to take a class I’d never played before, level it to 100 by playing through all the content, then get him raid-ready and kill the final boss in the game. This appealed to me on a number of levels – I was learning a new class, a new style, and use him to do things I’d never done before. It gave me something to do. Productive, or as productive as you can get in a video game.

There was something fulfilling about taking a character from the lowest of levels to the very end content of the current game.  Maybe a little too fulfilling.

November 16th, I queued up with my Mage and killed the final raid boss in Warlords of Draenor, Archimonde. I got no loot, wiped four times, but still managed to get the kill in the end. Hooray!

After that, Odingreen walked back into his garrison and I… well I logged off. For over a month, this was my goal. I’d never done any kind of raiding before, and I’d never played a Mage before. Once I did both, I had the immediate sensation that I had done what I had wanted to do so there was no point in continuing. I’ll have more to say about all of this, but for the moment… 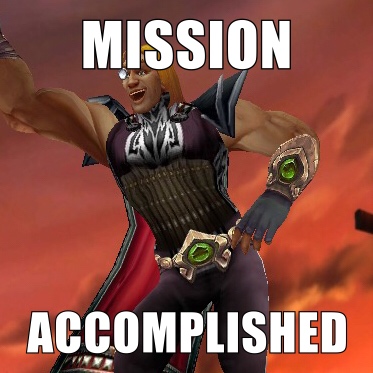 Posted on November 18, 2015, in Blog and tagged Alpha to Omega, Archimonde, LFR, Mage, Odingreen, Raiding. Bookmark the permalink. Comments Off on Alpha to Omega – Archimonde.

← Alpha to Omega – Warlords of Draenor
Dwayne Johnson on Depression →