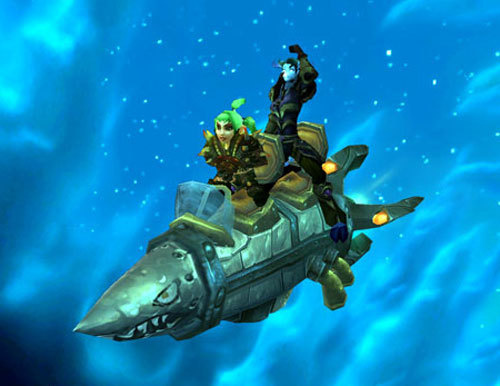 Oh look, flying is coming back to Draenor after all.

I can just imagine how that meeting went.

Dev 1: Have you seen the forums? Or twitter? People are actually unsubbing because we told them we’re not allowing flying.

Dev 2: Flying. Bah. Flying devalues the content that I – I mean, we, developed.

Dev 1: I don’t know man. I mean, they really seem passionate about it.

Dev 2: Sorry, I can’t hear you. I’m bathing in the tears of the masses.

Dev 2: I’m not being the dick here. They’re the ones who want to bypass game mechanics and content. Flying trivializes everything! I won’t have my – our – work being trivialized!

Dev 1: There’s got to be some kind of common ground though. A happy medium. Maybe we can gate it a little, make them get a couple of achievements to unlock it.

Dev 2: All the achievements. Yes. If they want to fly over my hard work and piss on, they’re going to have to crawl through it first. Crawl through it all! Muahaha!

While not as dramatic as that (I hope), Blizzard has lined up quite a few hoops for players to jump through if they want flying in Draenor. In a blue post, Blizzard said that they understood people might want to fly once they’ve “fully experienced the game’s world content.” And since this is their world, and their content, they’re going to make damn sure players fully experience it before their feet ever leave the ground.

Wowhead, being so damn awesome, already has a guide set up to help walk you through getting this done. They’ve done all the tough stuff. All you need to do is read and do as you’re told. It’s not rocket science; it’s just putting in time. From what I’ve read, Blizzard isn’t asking anyone to find the square root of anything. Just keep doing what you were doing when you were leveling through the content the first time, and you’ll be fine. There’s just a few things to do, like:

Aside from the starter zones for the opposite faction, this isn’t that difficult to complete. Get on your ground mount of choice and start riding. Having the Stables in your garrison will help keep you on your mount, and at Level Three will help you cover ground quicker.

If you have the Handynotes addon, you can’t help but see things things on your map. You have to cover the ground anyway (see above), so chances are you’ll be riding by the damn things while you explore. Declutter your map by picking them up as you pass.

Come on. Chunks of these were probably done during the leveling process since folks just love them some content. Also, cutscenes.

A pain in the ass at best. You can actually purchase many of these through your garrison vendor.

Okay, this is a slap in the dick. Again, Wowhead’s guide will make this relatively painless. Or at least, as painless as a rep grind can be. There are quite a few ways to augment the process (Trading Post at Level Three gives a 20% bonus to rep gained, for example) which will shave time off the road to Revered.

Now I know that there are folks who will be less that ecstatic about these “gates to progression”. They’ll  complain because they have limited time to play, as if there’s a race to fly. Or they might complain because they’ve never had to do so much work before when it came to flight, and Blizzard is just being impossible to deal with. Suck it up, princess. As dreamy and magical as it may be to lose yourself in an online video game, soaring through the digital skies, you are not entitled to that ability. You don’t have to fly. You want to. Nothing Blizzard is asking you to do is difficult. It’s just time-consuming. Put in the work and you’ll get flight on all your level 90+ characters. It may take you a little longer on a limited schedule, but so what? What’s your hurry? Blizzard isn’t asking anyone to play differently. Just play.

“What about you, smart guy?” asked no one. “Are you going to unlock Draenor flight? Or just sit behind your keyboard and by smarmy?”

I just might. Might be smarmy, and might try to unlock flying. It’ll give me something to do, and down the road it’ll make leveling easier. If I get it, great. If not, well sucks to be me.

Not really. It’s great to be me.

WoW can be funny sometimes. A month ago I was struggling to find things to do. Now between Harrison Jones quests, making piles of gold, and getting one character ready for the push for air superiority, I’m swamped. I may not bother leveling Number Ten because I just don’t have the time.

Right now, that’s a good problem to have.

Posted on June 11, 2015, in Blog and tagged Flying in Draenor, Patch 6.2. Bookmark the permalink. Comments Off on Flight Returns In Patch 6.2.