← Children’s Week
I Am Now Excited for Mists of Pandaria →

What A Long Strange Trip It’s Been

Apparently the Internet is not filled with assholes.

Let me start by saying that this post is a bit late, but this is the price we pay when we have other things to do. But I think that by letting this post soak a bit, stew in its own juices you might say, it has had the potential to turn into something more. Something delicious.

I’ll start by posting this – 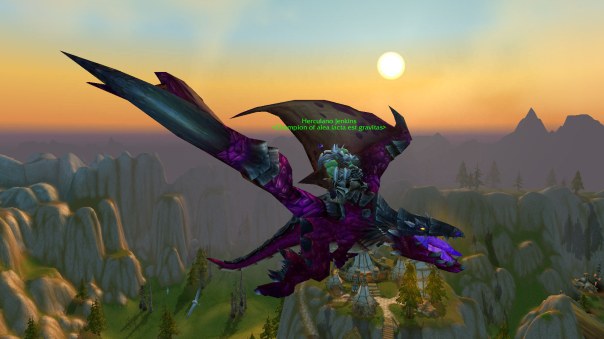 That, as you might have noticed, is a purple proto-drake. You obtain said creature by completing the Meta Achievement What A Long, Strange Trip It’s Been. That’s right, you too can fly Barney the Dinosaur if you complete a few (like, just about all) of the World Event Achievements.

School of Hard Knocks, the nightmare of an achievement, was the last hurdle for me. And let me tell you Internet, PVP players are not cool with PVE folks dragging their kids through a battleground. BG after BG, I’d hear in raid chat that people resented the fact we were there, that they were not going to help us complete our stupid objective, and as far as they were concerned we Care Bears could all just roll over and die in a ditch.

(Incidentally that last part was only voiced once, BUT YOU GUYS WORDS CAN HURT OK!)

I finished two parts of the School of Hard Knocks achievement pretty quickly – Assault a flag in Arathi Basin and Assault a tower in Alterac Valley. The flag was simple enough; just race out of the gate and get the flag. The Alterac Valley tower was a bit different. I ran into the tower and there were a bunch of Alliance folks standing there by the flag. I watched them and waited for them to attack. When they didn’t immediately try to stab me in the eyes or fire lighting bolts at my testicles, I suspected these folks might be on the same page as me. So I rolled up and capped their flag without any hostility on their part.

Naturally I was killed as soon as I left the tower.

Punch In The Eye (of the Storm)

Capturing a flag in Eye of the Storm took some time, but even more luck. After about six of these BG’s, I understood the strategy the opposition would use. They would send two people to capture towers, and send the rest to stand by the flag and murder the shit out of anyone who showed up with an orphan. See, if you had an orphan it was a safe bet that you weren’t a PVP’er, and therefore didn’t have PVP gear. Under those circumstances, getting anywhere near a flag was akin to sticking your head into a wolverine’s cage: you were going to get ripped to pieces, it was going to hurt, and there was no way around it.

Lady Luck decided to clock in after her obvious drinking binge and gave me a drunken wink while she showed some leg to the opposition. The flag respawned… and no one was there.

No on except me.

I grabbed the flag and ran like my ass was on fire.

Now I’m not a PVP guy. I know warriors have all sorts of tricks, trinkets, and abilities to help them survive. But at that moment, with a herd of pissed off Alliance people attacking me and trying to kill me, all I could think was COMEONCOMEONRUNRUNRUNRUNDON’TDIEAAAAAAHHHHHH.

Somehow, I capped it. With Hordies healing me, running interference, and just being there for me, I capped the flag.

I finished off the BG and don’t even remember if we won or not. I still had one battle(ground) left to fight.

You’d think this achievement would be easy enough to do. Just fill up the flag room with Hordies, wait for an Alliance player to run in, let him grab the flag, kill his guts out, return flag. Easy peasy.

Not so much if the Hordies don’t care about orphans. Heartless bastards. 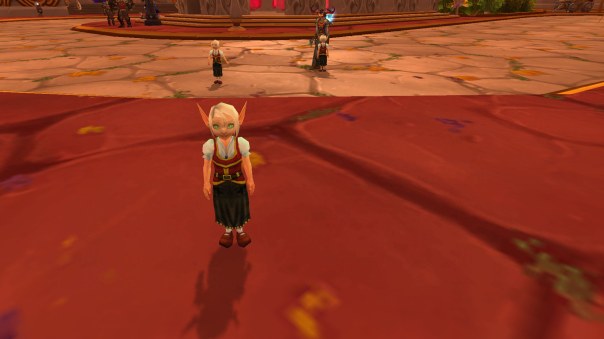 In retrospect it might have been better to get this one done on the first day. More people would have been doing the achievement, and probably could have opted for the pile on and kill strategy. I ran it in the middle of the week, after the big glut of achievement hunters already had what they needed. So when everyone charged out to grab the Alliance flag and all the glory that goes with it, only three of us sat back with our orphans.

Great. You know what works worse than three PVE players hanging back to “protect” a flag? Having a druid flanked with rogues roll in like SWAT and take the flag, leaving only disappointed corpses behind.

I didn’t want to admit defeat. Maybe the next BG would be luckier. But I suspected that Lady Luck had passed out for the evening, leaving me with the hangover.

Death after death, gnome rogues unwrapped my entrails like it was Christmas morning. Side note – people who make fun of (or hate on) gnomes either a) have never faced a gnome rogue in a BG, or b) have had their ass handed to them by a gnome rogue in a BG. They’re small enough that when they cut you open, they can crawl inside your torso and make you dance like a bloody hand puppet.

In an act of suicidal desperation, I chased after the druid flag carrier. I chased her right into the heart of the Alliance fortress. She stopped in the tunnel and I started attacking her. Now was my chance! Now was my best and only chance!

I then watched her drop the flag right in front of me. In a panic, thinking I’d killed her or somehow knocked it out of her hands, I picked it up and returned it. This was promptly followed by the achievement spam, and then by my death as the gnome rogues caught up with their flag runner and ran me through.

This druid, Anyaka helped me end my Long Strange Trip.  And for that, I am grateful.

And while for me the Trip is over, the Journey continues onward.

Posted on May 7, 2012, in Blog and tagged Achievement, Anyaka, Childrens Week, PVP, School of Hard Knocks, What A Long Strange Trip Its Been. Bookmark the permalink. 1 Comment.