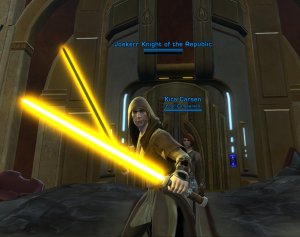 I have been pretty hard on Star Wars: The Old Republic lately.  Especially when it comes to the whole political toilet that is Coruscant.  From the quest to the zone itself, the entire place just rubbed me the wrong way.  But now that I’ve finished most of the quests there (which I never would have done had my brother – the enabler – not asked me to group up to knock them out faster) I look back on my time on the capital of the Republic with maybe more forgiving eyes.

Interesting Class Quest:  As far as the story goes, it certainly started off slow but definitely picked up toward the big reveal at the end.  By the time I was ready to leave the planet, I felt like I’d saved it.  Had a nice, epic feel that helped to choke down much of the frustration from the other aspects of questing.

Convenience:  For most of the quests, you will end up back at the Senate Tower.  Underneath the tower is everything you need:  Bank, AH, Vendors, Crew Skill trainers, and so on.  Sadly, not one prostitute.  Bioware clearly dropped the ball on that one.  It’s a tower full of Senators, people!  How am I to believe there isn’t one hooker nearby!

Not to mention some bitchin' tunes to dance to.

Poorly laid-out quests:  I was hoping the starter planet would be the end of it, but I guess this is just how the questing will be.  It’s great that the four quests have components that I can knock out at Point B, but what’s the point if I have to run all over the damn place just to find the quests to start with?    The Justicar level, for example.  If you hang a left rather than a right, you get Quest A rather than Quest B.  But on my way back, I pick up the quest that I missed on the other block WHICH SENDS ME RIGHT BACK TO WHERE I JUST LEFT… ON THE OTHER END OF THE ZONE!  It’s things like this that are going to make me skip certain quests entirely just because there’s no way I’m going to backtrack.

And don’t get me started on Senate Tower quests:  get quest, fly to new zone.  Return to tower, return to zone I just left.  Pull lightsaber, stab self repeatedly.

Too Damn Big:  I know I said it before, but it bears repeating – even with Sprint, it takes too damn long to get anywhere in the zone.  And why does it have to be so big, other than  to extend gameplay and frustrate players?  Why does the taxi have to be so fucking far from the Senate Tower?  Why can’t you get a cab right in front of the tower?

Skill Upgrades:  It happened in the newbie zone, and still happens.  Sure, it’s nice that we get new abilities every level.  What isn’t cool is when I’m in the middle of a zone, smack dab on the wrong side of Way The Fuck Out There, when I level up.  So I can either forego the upgrade for awhile, maybe even an entire level, or I can start the long run back to the Senate Tower to train new talents.

But I have left the planet, and at Level 17 things are still moving along.  I’m a sucker for the Story, and right now that’s keeping me playing.