Physics Is The Real Cataclysm 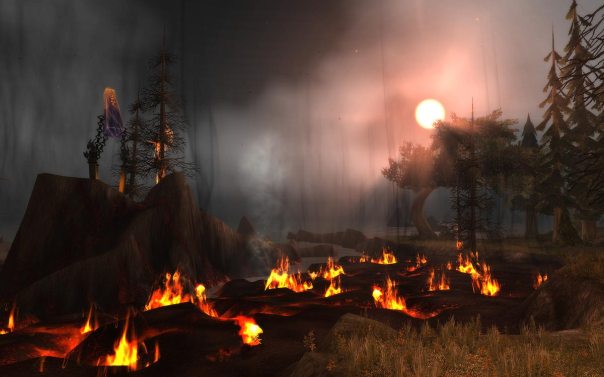 Cataclysm is in full swing, and players have been praising/bitching about their class changes, Heroic dungeons, gear, and raids.  Deathwing is still looked at as the big bad, which has put Arthas in full emo mode (and probably on suicide watch).  Destruction, rebirth, what was old is new again.

If you thought Deathwing was the most devastating thing to happen to Azeroth, then hold onto your hats.  I have found the true Destroyer of Worlds, and it is SCIENCE!

For those of us who spend unhealthy amounts of time playing World of Warcraft, the land of Azeroth seems like an awfully big place. A level 85 human warlock named Daelyn (who also happens to be a physics and applied math major) decided to perform some in-game experiments and calculations to figure out just what sort of world WoW is.

To get a baseline measurement, Daelyn flew from the southern tip of the eastern continent to the northern tip, a trip that took about ten minutes at an in-game speed of 65 miles per hour. Based on in-game maps, this implies that the entire pole-to-pole distance is about 25 miles, and if you do the math, the entirety of Azeroth turns out to be a globe with a radius of eight miles, and a land area of about 275 square miles, which is slightly smaller than New York City.

Earth, by contrast, has a radius of some 4,000 miles. Assuming that Azeroth really is that tiny, Daelyn then tried to determine what sort of physical structure would be required to account for the fact that Azeroth seems to have about the same surface gravity as Earth, when it’s so much smaller. One way to make it work would be if Azeroth was made of the same super-dense matter as a white dwarf star, but this is obviously not the case. The other option would be an inverted Dyson sphere with a black hole at the center. Essentially, Azeroth exists on the outside of a hollow spherical shell of immense tensile strength, inside of which is a little black hole about five feet across. This neatly accounts for the relatively high gravity with respect to size.

Still with me on this? Awesome, ’cause there’s even more craziness.

All these immutable physical conclusions lead to some interesting numbers related to in-game travel. For example, the boat trip from Ratchet to Booty Bay (a common voyage for adventurers in WoW between two neutral, goblin-owned coastal cities) covers a distance of 25 miles in about ten seconds worth of in-game time. Assuming constant acceleration followed by constant deceleration, the boat would achieve a top speed of 14,400 miles per hour with an acceleration of 128g, which would crush a human ten times over even if (or especially if) he or she is wearing plate armor. Ouch.

Even with all of these assumptions, there are still some trifling little physical facts that keep things inconsistent and, uh, magical. For example, when the sun sets in what appears to be Azeroth’s northern hemisphere, it somehow sets in the northwest, as opposed to the southwest, which would imply that Azeroth is in fact a flat plate, not a globe. And gravity seems to be the same in both Deepholm (which is a mile underground) and the Exodar (a city on top of a huge mountain), when it really shouldn’t be, considering their relative altitudes. Hmm.

It’s certainly worth mentioning that the World of Warcraft version of Azeroth is, for the sake of a playable game, not intended to be “to scale,” and I guess at some point, you really do have to throw up your hands and just admit that it’s magic. And, you know, a video game.

Bet you wish you’d paid attention in Physics class now, don’t you?  It’s nuggets of knowledge like this that’ll get you phat loots, or at the very least, not kicked from your raid for standing in the burning shit yet again.