I didn’t witness this event at Blizzcon, but my hat goes off to the dude who played his nerd card strong at the Quests and Lore Q&A and managed to get some ownage for what I guess would be the first time in his entire life.

You know this got him laid. Again, for the first time in his entire life.

Oh who am I kidding.  He still didn’t get any.  Chicks, that is.

Still, he showed plenty of  guts by getting up there in front of the thousands sitting there live, and the tens or hundreds of thousands watching at home, and laid down the Lore to the people who developed the Lore in the first place.

He’s had his balls busted over his delivery, his pasty and pimply complexion, his blank robotic stare.  Blue Poster Nethaera came to Red Shirt’s defense:

I don’t think that’s his fault really. Keep in mind a few things (and those that have asked questions before will understand this):

Every person asking a question is standing there perhaps for the first time, with a microphone in front them, a very large TV camera in front of them and very bright lights shining on them. Then, add to it that as you talk, you can hear yourself echoing through the hall. If you wait for that echo to fade, you end up talking much slower than you normally would. It’s a bit disconcerting to say the least for anyone who isn’t used to that. Getting up in front of thousands of people to ask a question is unnerving for many people given those circumstances. It’s not easy and I applaud anyone who gets up and asks an informed question of the panelists under such conditions.

While Red Shirt never did get the babes that usually follows his level of bravado, he did get two things that probably meant just as much to him (which is sad, but I’m not here to judge) –

He got the Lore fixed in-game, and got a nod from the Developers. 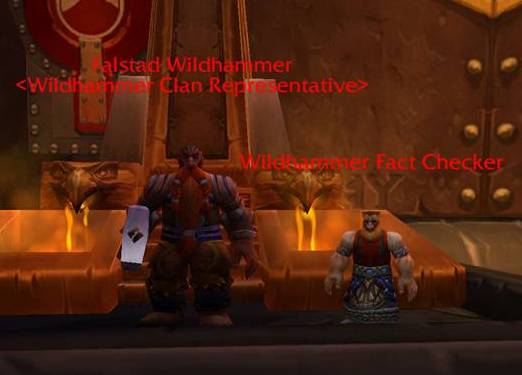 Sometimes Blizzard can be pretty cool.

Speaking of facts, I’ve updated Fury 101 to reflect the changes made to Fury Warriors in Patch 4.0.1 – courtesey of Ensidia.  Check it out by clicking on the tab up there.

Posted on November 2, 2010, in Blog and tagged Blizzard, Blizzcon, Lore, Quests, Red Shirt Guy. Bookmark the permalink. Comments Off on Just The Facts.