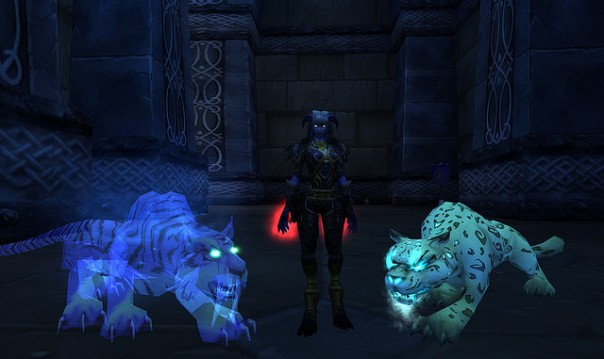 Yet another patch has come and gone on the Beta, bringing a few more changes to the roster of Hunter Pets.  It’s going to be a wild and crazy time for Hunters, because so many of their pets will have class-like abilities and buffs.  Blizzard told raiders to “Bring the player not the class”.  Well now that becomes “Bring the Player not the Class – as long as that Player plays a Hunter with the right pet”.

I spoke with a Hunter who was quite pleased with the changes made to the Spirit Beast.  SB’s are a different creature altogether, because they’re not just Exotic, they’re rare.  Sure, there are other rare creatures out there for Hunters to tame, but those are rare examples of species that can be commonly found elsewhere.  Spirit Beasts aren’t just rare pets.  The whole species is damn hard to find, due to long respawn rates and a small window that they stick around for.  Sleepless night, jitters, and ulcers have been the very real result of hunting a Spirit Beast.

“It’s not just the anticipation that kills you,” the Hunter told me.  “I’m talking long hours of flying around to various spawn points, for maybe days at a time, and all the while you just hope that you’re the only one around when the Spirit Beast shows its face.”

Worried about other Hunters taming it out from under you?

“I’ve heard stories about other people – not even Alliance, but my own people – who have killed the creature out of spite because they couldn’t tame it first!  Waiting for hours and days at a time, essentially hoping for Fate to smile on you, can make you a bit insane.”

Indeed.  Naturally, Hunters who put themselves through that kind of stress want to be able to use their pet when they raid.  Unfortunately, in the pre-4.0 era, Hunters were expected to bring a Wolf for the attack buff.  The Spirit Beast had nothing to offer a raid.  That is, until now.

The bad news is that the 4.0 Spirit Beast will lose their Spirit Strike ability.  However, the good news is that they’ll not only get a Healing spell, but they also share a strength/agility buff with cats.

Does that make Spirit Beast the new “raid” pet?  No, there’s far too many options for raid pets now.  But at least the Spirit Beast will be worthy of consideration this time around.

You can check out more charts over at the Petopia Forums.

This is Herc the Merc, Fury Warrior and fan of the Spirit Beast.  Hunters, put on a few pots of coffee and start camping these ghostly apparitions.  They’re more than just cool-looking, they’re a Death Knight and Shaman rolled into one.

Posted on September 24, 2010, in Blog. Bookmark the permalink. Comments Off on Patch 4.0 Spirit Beast – Bring The Pain.