There’s hundreds of stories that come out of PuGs. Some of them are uplifting, showing the better side of humanity that seldom gets representation in the World of Warcraft. More often, the stories reflect the more common, ignorant and self-serving side.

This is the story of Tragon, the Human Warrior.

Tragon happened on the group as it was running Utgard Keep. They’d suffered numerous wipes and, as was often the case, when the going got tough, most left the party. There were two from the original party – a DPS Pally and a BM Hunter. It was a non-heroic group, mostly around the 70 range, except for Tragon who was 69. Clad in greens and a few blues, gemmed as best he could, Tragon asked how far along they were.

“End boss”, the Hunter said. “We wiped on Ingvar the Plunderer.”

It was the first time tanking the heavy hitter, so the group was somewhat prepared for hiccups with Tragon. There were two or three, which resulted in party wipe after party wipe. Each time meant a long run back to Ingvar. Plenty of time for reflection on what went wrong, and after the second wipe, who was to blame. The Priest took some heat, but Tragon was constantly getting crushed during the encounter. People weren’t coming out and saying it, but the feeling was there that maybe, just maybe, this lowbie Warrior wasn’t going to be able to pull it off.

The tension finally bubbled over, which lead to a dick move by the druid who pulled Ingvar and then dropped the group. (Why did you do it, Skunktank of Scarlet Crusade? Were you trying to wipe the group? Or bug the encounter? Or does being a jagoff just come naturally to you?)

Even with all the chaos swirling around him, Tragon kept his cool. He never complained about late heals. He never tried deflecting criticism. He never showed that the repeat wipes were getting him down. He was in it for the long haul, despite being the lowest level in the group.

The Priest finally showed doubt when a Warlock joined the group, and said they’d never pull it off because the Warlock was within 1k Health of the tank. I suppose that means FAIL in some languages.

Tragon didn’t know that language. He soldiered on, encouraged by the Shaman who was confident they’ll score the win the very next pull. With that, Tragon charged forward…

Tragon held firm but died during the Undead Ingvar phase. So did many others. But the group didn’t wipe, they held strong, and managed to pull out the win. Achievement for Tragon – Utgard Keep.

I don’t know if he got any loot from Ingvar. What I do know is that he never showed doubt in himself. He never offered to drop the group so they could get a better geared tank. HE was the tank, and by God he’d be the one to get the job done. That’s the sign of a good meat shield, and that “never give up” attitude is probably why there’s such a tank shortage.

After all, the easiest route is to drop and get a better group.

Unless you’re Tragon, vanquisher of Ingvar the Plunderer. 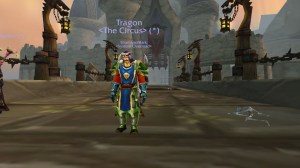 Posted on January 2, 2010, in Blog. Bookmark the permalink. Comments Off on The Tale of Tragon.