A Day’s Work For A Day’s Pay 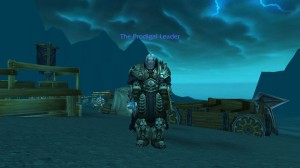 I caught a Youtube video on the weekend which described how one would go about burning off all 25 Daily quests in just under 90 minutes. In that 90 minutes, the narrator pulled in about 400gp in the process through quest rewards and vendoring greys.

I had some time on my hands, so why not? Let’s see how well this works.

Rukgut was voted as “Most Likely To Have These Dailies Unlocked”. Rokk pretty much bulldozed his way to 80, so things like questlines were more of a punchline to him. Ruk was somewhat more attentive, so I suspected he’d be the best one to use to test this out.

Day One: Not as successful. Turns out there were a number of dailies that needed to be unlocked. However, my 90 minute block did net me about 400 gold. That was pretty much from quest rewards, vendoring greys (as well as quest items).

Day Two: A little more success. Hodir’s Spear, phallic reference aside, can suck a dick. That’s one quest that will be skipped.

Day Three: Not all the dailies were unlocked, but enough for me to make a go of using up all my Daily Quest spots. Two hours later, Ruk was 300gp richer and had completed 19 of the 25 Daily Quests alloted for him. Not bad, not bad at all.

Some tips and notes –

Is there a more effective way of earning gold? I’m sure there is. But when you put yourself on a timeline and go in with a plan, you are constantly busy. Always moving. For people who feel like they’ve “hit the wall” as far as casual endgame play goes, this is a nice little distraction. Plus, for folks who have a limited time to play, knocking off all the daily quests and making a nice chunk of change in the process ain’t nothing to sneeze at.

The Rokk’s Tip Of The Day: The Daily Quest Spy Hunter is available from the Sons of Hodir upon reaching Honored status with them. It’s pretty easy, simply kill three dwarves that your Spirit Wolf sniffs out. The Wolf moves sloooooow and can take quite a while to sniff out a dwarf, especially if there are a few people running the quest in the area. To make the Wolf move quicker, hop on your flying mount. The Wolf will not despawn, and will move at your mount’s speed. So if you happen to have a flying mount with 280% movement speed, your Spirit Wolf will sniff out dwarven spies 280% quicker. Just make sure to keep an eye on him as he sprints around in the snow!

Posted on October 5, 2009, in Blog. Bookmark the permalink. Comments Off on A Day’s Work For A Day’s Pay.