Hey Blizz! Everquest Has Something For You!

I mentioned in a previous post that I’d played Everquest in the past. In fact, it was my first MMORPG (and only, other than World of Warcraft). When WoW was first released, many an EQ guild found itself gutted after the mass exodus of the player base to this new game. It wasn’t just the shiny new game that prompted people to leave in droves. It was frustration with their old game, the seemingly non-existent customer support by Verant/Sony, and glitches in general.

There was also the leveling problem with EQ. Unless you were part of the Holy Trinity (Warrior, Cleric, Enchanter), it was hard to get groups. Most classes could solo to some extent, but it wasn’t very practical at all. There were very few quests to do, and the ones that could be done didn’t reap the rewards that WoW quests do. Players didn’t level up doing quests, they hit a zone and stayed there killing mobs.

Recently I read about a new introduction to the game that I wouldn’t mind seeing Blizzard steal for WoW. I mentioned one before in the specialty server that allowed players to create characters at a higher level. This new function I read about would affect the leveling process, and with Cataclysm coming out and the revamping of the 1-60 zones, now would be the perfect time to introduce this concept.

The concept is Mercenaries. 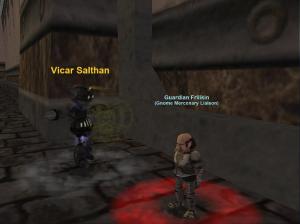 In Everquest, there are two types of Mercs – Tanks and Healers – that can be hired from a “Liaison”. Rather than a player waiting around for a group, they can “hire” one of these Mercs. They level with the player, come with their own gear that also improves as they level, and can be upgraded via quest chains. Tanks can solo reds from 1-60, which helps new players who want to catch up to their friends to level quicker. The higher rank the Merc is, the better abilities he has. There is an Upkeep cost every fifteen minutes or so, where gold is deducted from what the Player is carrying. If they can’t pay, the Merc despawns until the Player has the cash to pay.

It’s a gimmick that I think would work just fine if carried over to WoW.
Mercenaries would be a great leveling tool. Right now, if a low level player is trying to complete a quest that needs two or more people, they’re hard-pressed to find someone to help out in the pre-60 era. It’s also much easier to burn through content if you have a pocket healer, or tank, to cover your ass. Even sweeter if that extra body doesn’t reduce the amount of XP per kill, yet still manages to level up at the same rate as you. Sure there’s no social banter, but for the more militant-minded levelers who don’t care to chat it up while they grind away killing raptors or boars, they can let their money speak for them.

Mercenaries take cash, baby. Blizzard rather enjoys adding gold sinks to the game. Seriously, twenty grand for a Mammoth that comes with Vendors? Well, Blizz can make the higher ranked Journeymen Mercs as expensive as they want. Players will pay if it helps speed up the leveling process, and for the casual players who don’t have heirloom items for alts, they’ll run their AT Dailies to fund their lower level toon’s progression.

Mercenaries don’t criticize. One of the things that makes a PUG as much fun as a Gabriel Gonzaga-styled kick in the balls is being told you suck. Tank can’t hold aggro? Healer lets someone die? DPS is low on the Recount charts? L2P N00bzor, or whatever the kids are saying these days. You get the idea.

But with a Merc, Players develop skill without worrying about comments from the peanut gallery. A Tank with a Healer Merc can learn to hold multiple mobs, keeping his TPS high enough to overcome the Healer aggro. Healers with a Tank Merc can learn to work on heals and buffs, as well as the rare perk of actually leveling as a Healer rather than a Healing DPS class. DPS can run with a Tank Merc and learn to control their aggro, or run with a Healer Merc and learn to keep their DPS higher than the Merc’s healing aggro.

Players learn while they level, and level at a speed fast enough so they don’t get bored, yet slow enough for them to learn what their abilities do. Sounds like a good idea to me.

I can’t wait for Blizz to steal it.

Posted on September 25, 2009, in Blog. Bookmark the permalink. Comments Off on Hey Blizz! Everquest Has Something For You!.