← Whose Side Are You On?
When Wishes Come True →

The Sky is Falling… On My Head 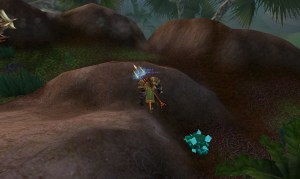 Somehow, amidst all the hoopla of rebuilding shelves in the basement and hauling giant sheets of wood up and down stairs more times than I care to admit, we dinged 75.

To celebrate this festive milestone, I decided it was time to go to Sholazar Basin and knock the bottom out of the Mining profession. This had a twofold purpose: One, epic flying is just around the corner, and the greatest Death Knight this side of a server crash doesn’t have the muffins to pay for it. Mining will help to do that.

Okay, there’s not much of another reason. Rokk needs moolah. Mining makes moolah, either by itself or through Blacksmithing. Hooray.

Did you know the southern part of the Basin is filled with neutral animals? Yeah, so did I. That’s why I went there. I did a number of laps, scraping the bottom of the Basin (see what I did there?) and picked up a few stacks of Saronite Ore.

I have bitched about this before, but when I get my WoW on during the week, I’m doing it away from the Fortress of Rokk-itude. I’m forced to play on an internet connection that bounces off a satellite dish. That’s right, I use the Internets from Outer Space.

Consequently my latency tends to jump up into the 6k range, with a Framerate of 1. Not 1 frame per second, one frame. Had I the power to grab the Internet, I would have thrown it out the window. But since it was beaming in THROUGH the window from the SKY (disliking the sky now), I’d just be sending it home while I lay on the floor in the fetal position with fudge in my shorts and foam in my mouth.

I know what you’re asking. “Rokk! How could things possibly get any better!?”

The fun came in the form of every Billy badass from the Alliance side deciding to kick me in the left testicle. Why only the left? I’d blown the other one watching Rokk stutter along at Warp Factor Geriatric for almost an hour.

Oh sure, it was different people. Different guilds. But like clockwork, an ore would pop up on my mini-map and just as I rode up to it, a Human or Nelf or Space Goat would swoop out of the SKY (see a trend?) and snatch the ore from betwix my fingers. Even in the screenshot for this post, you can see a damn helicopter flying away because I won an ore race by having the thing pop under my feet during one of the freeze frames.

Somehow, through a zen-like patience built through a technique of deep breathing (beer, not air), Rokk not only capped his Mining but he managed to round up enough ore to get to his next level of recipes in Blacksmithing.

Where do I go to get the new recipes?

I Hate The Sky.

Posted on July 6, 2009, in Blog. Bookmark the permalink. Comments Off on The Sky is Falling… On My Head.

← Whose Side Are You On?
When Wishes Come True →